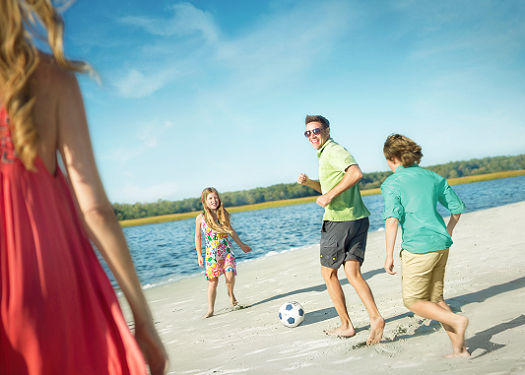 Everyone can agree there’s nothing quite like a day at the beach, with its warm air, cool breeze and gentle waves. But what’s even better than a day at the beach? A whole week of games on the beach! Once you’ve settled in at your accommodation, hit the beach to play with friends and family. With nine miles of the widest beaches along the Grand Strand, there is plenty of space for some friendly competition.

We put together a list of our top seven beach games to keep the whole family entertained. Whether it’s a game you already own or a new one you can pick up at the store, we have a fun beach game for every day of the week:

Need something to do with little kids or toddlers at the beach? Start a beach scavenger hunt! Make a list of things you can find on the beach, like different types of seashells, a piece of coral, a crab claw or even a shark’s tooth. Anything you can think of . . . put it on the list and take a walk along the water’s edge to see if you can find them all!

In Ladder Golf®, teams take turns tossing bolas—two golf balls connected by nylon string—at the game ladder. Players are awarded three points for hitting the top rung of the ladder, two points for the middle and one point for the bottom rung. The game rules state that players stand 15 feet away from the ladder, but this can be easily modified for young kids. Get ready to spend a lot of time trying to perfect your throw with this addictive game! 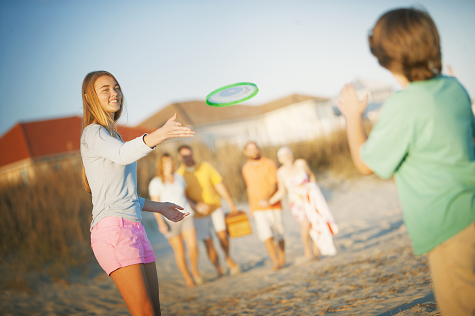 A mix between playground classic foursquare and traditional volleyball, this fast-paced game is entertaining to play and watch. Played by four people in two teams of two, the goal of the game is to spike the ball on a trampoline-like net so your opponents can’t return it. Reflexes are put to the test with this game that’s guaranteed to get your blood pumping! Before hitting the beach, brush up on the rules so you can show your group how to play this exciting game.

This is a fun beach game for people who never want to leave the water! Waboba® Surf Balls are designed to bounce and skip across the water when you throw them, putting a twist on the classic game of catch. Send the Waboba® Surf in the direction of your partner and see how long you can keep a streak going without having to chase after the ball! Another fun variation of this game is to see who can skip the ball the furthest along the water.

If you love the concept of cornhole but prefer to not carry huge boards with you to the beach, TidalBall® is the perfect game for you! With TidalBall®, instead of using boards, you simply dig a hole in the sand and a crescent-shaped trench behind it. Players get three points for landing one of the balls in the hole, and one point for landing it in the trench. Born on the beaches of South Carolina, this game provides entertainment for all ages. If you still want to get in on some traditional cornhole action, head over to 810 North Myrtle Beach for a game.

Frisbee® is another classic beach game that translates to every age group and skill level. A simple Frisbee® can be passed around the beach with a group or, if you’re seeking something more challenging, you could play Flimsee®. Set up the four poles that come with the game like goal posts, with two on each side. The bendable sticks have upside down cups on top of them that players try and knock to the ground. 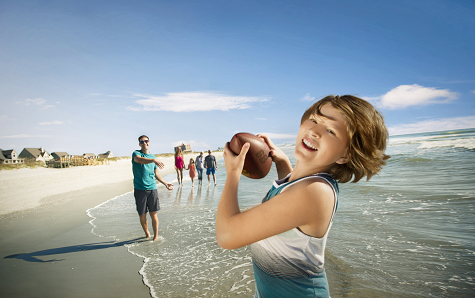 Teams of two compete to score 12 points, with one point being awarded for knocking a cup off a stick with the disc and two points being awarded for sending the disc directly between the two sticks of your opponent. To add an element of defense, if your opponent catches the cup you knock off while it’s still in the air, no points are awarded. Make things interesting and start a tournament . . . losers pay for dinner!

The Classics – Soccer, Football and Volleyball

Sometimes the best beach games are the simplest! Pass the football around or start a friendly game of soccer or touch football. If you have a volleyball and net, bring them to start a family-friendly tournament. You can even invite others around your stake in the sand to join and make new friends. The more the merrier!